Now we’ve made an new game based on the game Word puzzle, where you instead of trying to find certain words, can find which ever words you want. The new game is called word hunt. When you select a word, it is checked against a dictionary and if the word is found in the dictionary, the word will be marked as found. See a screenshot of the game below: 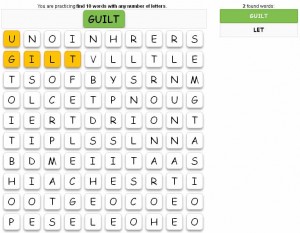 The game is not played on time, but the levels are completed by achieving a certain number of words, and at the higher levels the length of the words also matters. Play the word hunt game now!