Do you want to play locked game level?
Sign in as Plus member here on plus.helpfulgames.com or go to Correct spelling on www.helpfulgames.com to play with ads.
Save
Comment
Share
Try this game in Swedish:
Rättstavning

Recent activities in this game

Only two words of three are spelled correctly - can you find which is incorrect? 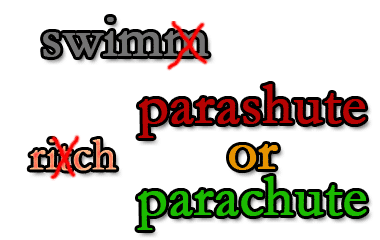 Choose the sound to practice from the buttons above. Then ten questions are randomly generated that exercises spelling with that sound.You will get three words or sentences, and one of these is misspelled.It's up to you to find the one that's not spelled correctly.

A grapheme is the smallest semantically distinguishing unit in a written language, which in this game is in the form of letters: vowels and consonants. The spoken language equivalence of grapheme is callled phoneme. In this game, the spelling is practiced in groups of English phonemes. The SH sound below is an example of a phoneme. A phoneme is usually spelled with two graphemes, which is called digraf.

Below are listed the general rules for the spelling of the English language organized by phonemes. Most rules have exceptions so beware!

This sound has several spellings in an othographology perspective:

The M sound is a consonant sound and has five primary spellings, where four are digraphs:

This sound have many different possible spelling. Among the most common are:

The /f/ sound is usually spelled with ff after a short vowel and f elsewhere, but some borrowed words are spelled with ph.

May be spelled in several ways, but the general rule is that The sound /ch/ has two spellings: tch after a short vowel, ch anywhere else. The two most common spellings are therefore ch and tch. Common endings sounding CH are -tion and -ture. There are, however, several exceptions: sandwich and much are two examples.

This english sound has multiple spelling variants: The most common way of spelling the sound /sh/ is with the digraph sh.

Use i before e except when the two letters follow c and have a long e sound or when the two vowels are pronounced long a. The different spellings of the e sound are: Start practice now!

The G sound has five dominant spellings: The G sound at the end of words are usually spelled with -ge, -dge or -age.

Days of the week
English

If you find a spelling mistake or something else that should be corrected, feel free to contact the game creator or us at Helpful Games.